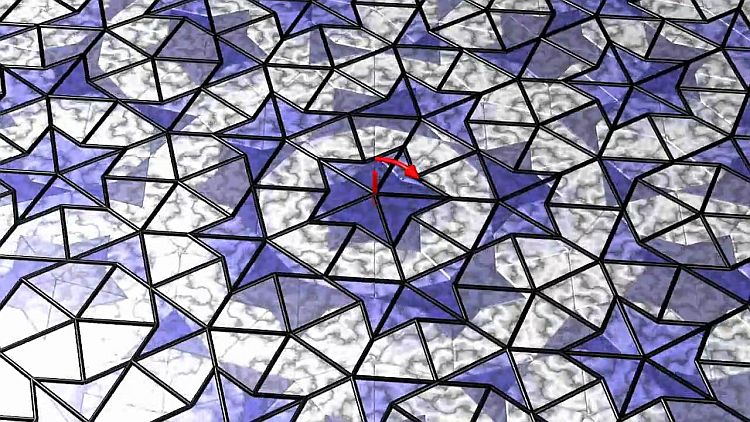 They got my attention, as they included some images of an intricate Tile pattern, so I started to read and follow the successive posts. All small in length, but when put together tell the story and get us into an uncharted territory, discovering new things.

The story is interesting, and it will be my day’s Blog project to share and document it. Hang tight. The Toots are reproduced as posted, with line breaks between each representing the small delay until the next showed up.

He’s this Mathematician who worked with Stephen Hawking, and he also coined this interesting and complicated tiling pattern where it looks like it’s repeating, but in actuality there’s no way to make a shifted copy of the pattern that matches the original. 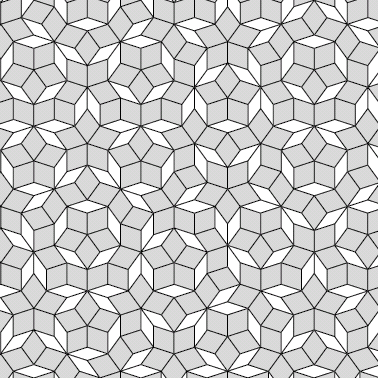 Anyway, people thought the Penrose tile pattern was pretty great and wanted to tile their floors in it; but you can’t find Penrose tiles for sale, because Roger turned out to be pretty litigious.

He sued a company in 1997 for making toilet paper with the Penrose tile pattern and won, but i think the patent’s expired now, so i hope someone on etsy.com gets on top of this.

Roger patented the tile pattern in the 1970s, but then some random Math nerd who was traveling around the Middle East found Penrose pattern tiling in a 15th century Mosque. 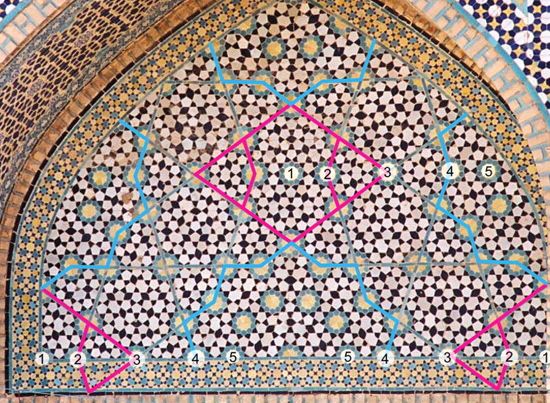 After benignstein made the post - located here, very soon there were reactions and commentary popping in. People “Liked” her posts, me included, by using the “Favorite” feature in Mastodon (a Star button, present under each post).

Some did more, by Boosting the post - equivalent to Retweeting, this will show the post to their own followers, and add a copy of it to the Boosting user’s personal profile. This in itself is great, as it helps more and more people see the post, plus we can find it if desired later - by looking around in our own profiles.

Yeah, unfortunately we don’t have a good Bookmarks feature in Mastodon yet - although there’s a need and requests from users, so it should be in the development pipeline.

(alternative versions of Mastodon like GlitchSoc already have Bookmarks; they are on the leading edge of the project development.)

During the chat after the post was completed, I mentioned enjoying the topic and asked if it was ok to use the text and images for a possible blog post - the one you are reading now, as benignstein had no problems agreeing, and even provided the original source for the post’s inspiration.

That is an article at Wolfram’s Mathematica :

A Bing search window is my looking glass into what the Internet can provide, and this turned out quick rich.

a. Penrose Tiling article at Wikipedia : 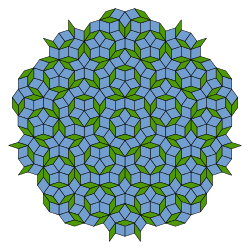 A Penrose tiling is an example of non-periodic tiling generated by an aperiodic set of prototiles. Penrose tilings are named after mathematician and physicist Roger Penrose, who investigated these sets in the 1970s. The aperiodicity of prototiles implies that a shifted copy of a tiling will never match the original. A Penrose tiling may be constructed so as to exhibit both reflection symmetry and fivefold rotational symmetry, as in the diagram at the right.
Wikipedia page 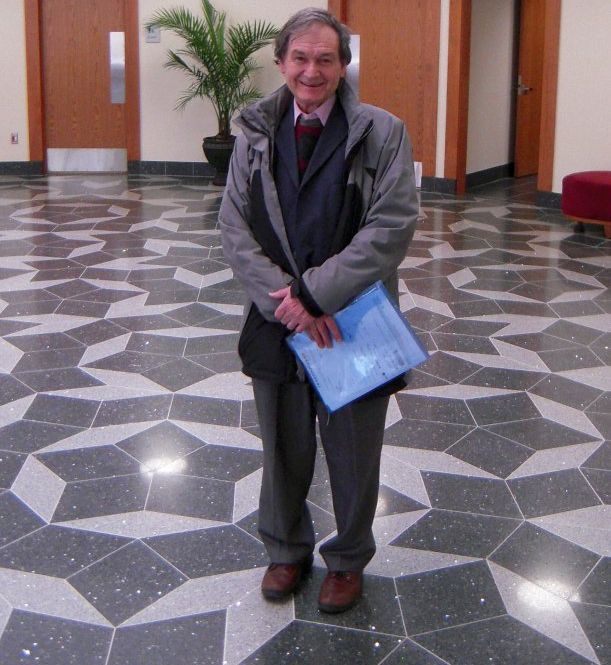 Roger Penrose in the foyer of the Mitchell Institute for Fundamental Physics and Astronomy, Texas A&M University, standing on a floor with a Penrose tiling.

Sir Roger Penrose OM FRS (born 8 August 1931) is an English mathematical physicist, mathematician and philosopher of science. He is Emeritus Rouse Ball Professor of Mathematics in the University of Oxford, an emeritus fellow of Wadham College, Oxford and an honorary fellow of St John’s College, Cambridge.

Penrose has made contributions to the mathematical physics of general relativity and cosmology. He has received several prizes and awards, including the 1988 Wolf Prize for physics, which he shared with Stephen Hawking for the Penrose–Hawking singularity theorems.[1]
Wikipedia page

c. Historical Evidence for Islamic architectural use of Penrose pattern :

Penrose was not the first to discover aperiodic tilings, but his is probably the most well-known. In its simplest form, it consists of 36- and 72-degree rhombi, with “matching rules” forcing the rhombi to line up against each other only in certain patterns. It can also be formed by tiles in the shape of “kites” and “darts” or even by deformed chickens (see the “perplexing poultry” entry below). Part of the interest in this tiling stems from the fact that it has a five-fold symmetry impossible in periodic crystals, and has been used to explain the structure of certain “quasicrystal” substances.
Geometry Junkyard page 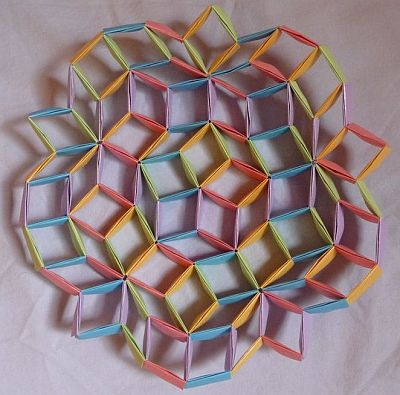 Mastodon is a microblogging platform akin to others you may have seen, such as Twitter, but instead of being centralised it is a federated network which operates in a similar way to email.

Like email, you choose your server and whether it’s GMail, Outlook, iCloud, wherever you sign up you know you’ll be able to email everyone you need to so long as you know their address.
Mastodon quick start guide

glitch-soc is a friendly fork of the open-source social media software Mastodon, with the aim of providing additional features at the risk of potentially less stable software. You can browse our source code and contribute to the project on Github.
GlitchSoc documentation

“Boost” (as in “signal boost” or “rocket boost”) is a synonym of “reblog” or “retweet” in Mastodon.
Mastodon quick start guide